A few days ago, the "Fenghuang Tengda" bronze sculpture with a height of 15 meters and a weight of 13.6 tons was completed in the Baicheng Ecological New District. The sculpture was designed by Tsinghua University professor and famous sculptor Wei Xiaoming over two years, using advanced 3D printing technology . The person in charge of the contractor said that â€œFei Huang Tengdaâ€ is by far the largest 3D printed sculpture in the country. 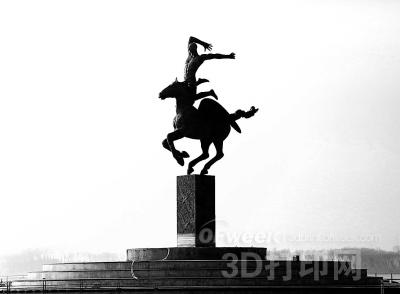 As everyone knows, "Fei Huang Tengda" is a Chinese idiom, and a popular saying is that this idiom has a lot to do with Baicheng. Many local people even regard Baicheng as the hometown of this idiom. According to legend, as far back as the ancient times, Baicheng was called Baibo and belonged to Dongyi. Legend has it that Bai Bo once tribute a yellow horse to the Central Plains. Three years later, the horse grew its wings and was named "Flying Yellow". Later, "Fei Huang" took Xuanyuan Huangdi to the sky, and this has an idiom that has been passed down to the present day. Flying yellow Tengda." Han Yu, a writer of the Tang Dynasty, once had the famous sayings of "flying yellow and not going, not taking care of".

The bronze sculpture "Feng Huang Teng Da" draws on the image of Shenma with wings in ancient Chinese legends. Through realistic and imaginative artistic language, it gives people strength, passion and hope. Professor Wei Xiaoming reduced the Feihuang Tengda sculpture to the green color of copper oxidation, which is similar to the color of ancient bronze.

According to reports, the sculpture is 15 meters high and weighs 13.6 tons. The installation process takes nearly a week. This "big Mac" will exist as the main sculpture of a sculpture group. In the vicinity of Heming Lake in Baicheng Ecological New District, seven modern sculptures reflecting the culture, history, humanities and ecology of Baicheng City were installed and the â€œFeihuang Tengdaâ€ was reflected.