Both Flash Memory and FRAM are a new generation of non-volatile memory. Flash Memory was introduced in 1987. It is the product of mature EEPROM and the development of semiconductor technology to sub-micron technology and large-capacity rewritable memory, while FRAM It was in the 1970s that there was a breakthrough in key technologies that did not enter the industrialization stage until the 1990s. It is a capacitor memory that uses ferroelectric thin films for memory data. Due to the use of ferroelectric thin films on memory cells, FRAM has the advantages of high speed, high frequency rewriting, low power consumption and non-volatile. In addition, FRAM can perform read/write operations under low voltage conditions, especially for smart cards and portable devices that require low power consumption.

One. Performance comparison between Flash Memory and EEPROM:

Both Flash memory and EEPROM are electrically erasable and programmable memories. Their principle is to store data in the form of charge on the floating gate electrode. Compared with EEPROM, Flash has unparalleled advantages in terms of integration. Because Flash Memory uses a single-tube unit, it can achieve high integration, and its cell area is only 1/4 of that of conventional EEPROM.

The following table shows the performance comparison of Flash Memory and EEPROM:

two. Performance comparison between FRAM and EEPROM and Flash memory:

The basic principle of the FRAM memory cell is the ferroelectric effect, which is a ferroelectric memory device that is stored in a spontaneously polarized form of a ferroelectric thin film. Since the FRAM controls the spontaneous polarization of the ferroelectric capacitor through an external electric field, and through hot electron injection or Compared with Flash memory, which has a tunneling effect and a write operation, FRAM has a fast write speed (more than 1000 times that of EEPROM and Flash) because it does not require high voltage during erasing, so the power consumption during writing is large. To reduce (1/1000-1/100000 for EEPROM and Flash), it is especially suitable for low power applications such as contactless cards or dual interface cards. In addition, since the tunnel oxide film is not required, the number of times of data rewriting is greatly improved compared with flash memory and EEPROM (10 5 - 10 6 for EEPROM or flash, and 10 12 or more for FRAM).

The following table shows the performance comparison between FRAM and Flash Memory and EEPROM:

Dear friend , if you are looking for non woven bags , just come here , as a professional manufacturer of packaging material , our non woven bags have many excellent functions as fellow:

Traditional plastic bags are thin and easy to damage in order to save cost. But in order to make him stronger, it will have to be more costly. The appearance of non - woven bag solves all problems, non - woven bag, strong toughness, not easy to wear. In addition, a lot of mulch non-woven bags, in addition to the strong, but also have waterproof, good texture, beautiful appearance of the advantages. Although the cost per bag is a bit higher than that of plastic bags, it can be used for hundreds, even thousands, of plastic bags for a period of time.

3.  Advertising in accordance with

A practical and beautiful non-woven bag is not only a commodity packaging bag. Its exquisite appearance is even more impressive. It is a simple and fashionable shoulder bag. With its strong, waterproof and non-stick features, it will become the first choice for customers to go out. On such a non-woven bag, you can print your company's logo or advertisement. The advertising effect is self-evident.

The ban was issued to address environmental issues. The reuse of non-woven bags greatly reduces the pressure of garbage transformation. And now advocate everybody environmental protection, can reflect the image of the enterprise more. The resulting potential value is beyond money. 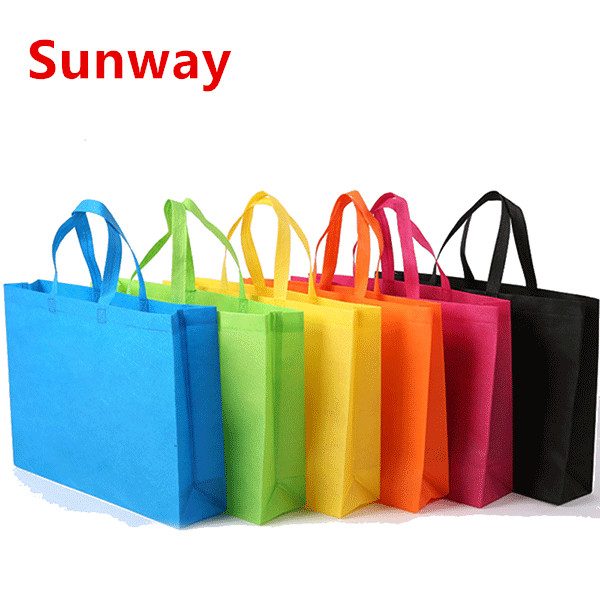